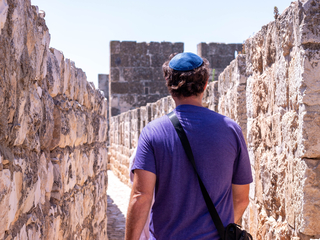 Question: Why are we obligated to count the Omer (the period of time between Passover and the next holiday Shavuot, the festival of first fruits) if Israel had already merited the redemption from Egypt?

What does the wise child say? “What are these testimonies, statutes and judgements that Y-H-W-H our God has commanded you?” [Deuteronomy 6:20]. Answer him according to all the practices of Passover, including “One does not maftirin (conclude) the Pesach meal with the afikomen (half of the middle matzah).”

In the siddur (prayer book) of Rabbi Isaac Luria it is taught that the word pesach means “skipping,” which refers to the fact that Israel at the Exodus achieved gadlut (complete enlightenment) by pesach = skipping over the 49 earlier stages of development and thus merited the reward of freedom from bondage.

According to R. Avraham, the son of the Maggid R. Dov Baer, a person needs to develop all seven of their main qualities, and should begin with honing love, awe and glory. Each, in and of itself should be turned toward the service of God so that we do not make use of these attributes for our own bodily benefit but for the sake of God. Each of the 7 main qualities contain all seven others within it, thus adding up to forty-nine. Only after all are honed are we able to open the fiftieth gate, Binah (complete enlightenment) and achieve enlightenment.

At the Exodus from Egypt (a.k.a. Mitzrayim), the Israelites did not pass GO nor did they collect $200, rather they skipped immediately to the fiftieth gate. Thus scripture says, “Israel came forth from Egypt, hamushim” (Exodus 13:18), which here will be translated as fifty fold, though normally translated as armed for battle, which teaches us they had reached the fiftieth gate of development and achieved enlightenment thus being rewarded with the Exodus. It was through binah (complete enlightenment)that the miracle of redemption took place and immediately afterwards this enlightenment was lost. Due to this loss they were then commanded to count out the forty nine days of the Omer leading up to the holiday of Shavuot in order to be invited to experience Divine revelation and receive the 10 Commandments.

This is the meaning of the wise child’s question, “What are these testimonials, statutes and judgements…” Ideally, on the holiday of Pesach/Passover we personally experience the Exodus as if we are leaving Egypt and thus are also in the state of gadlut (complete enlightenment). From that vantage point we too should question, and even object to the idea of statues and commandments as they interfere with our ability to act as enlightened human beings. But we are not actually in a state of gadlut (complete enlightenment), rather we are still in our own version of Mitzrayim (dire straits) and need to work through the 49 stages of development towards personal enlightenment.

May we all merit to become as enlightened as the wise child to view the world from their vantage point. May the plagues be lifted from our house and may all who need come and eat.

Speaking Torah: Spiritual Teachings from around the Maggid’s Table Vol.2